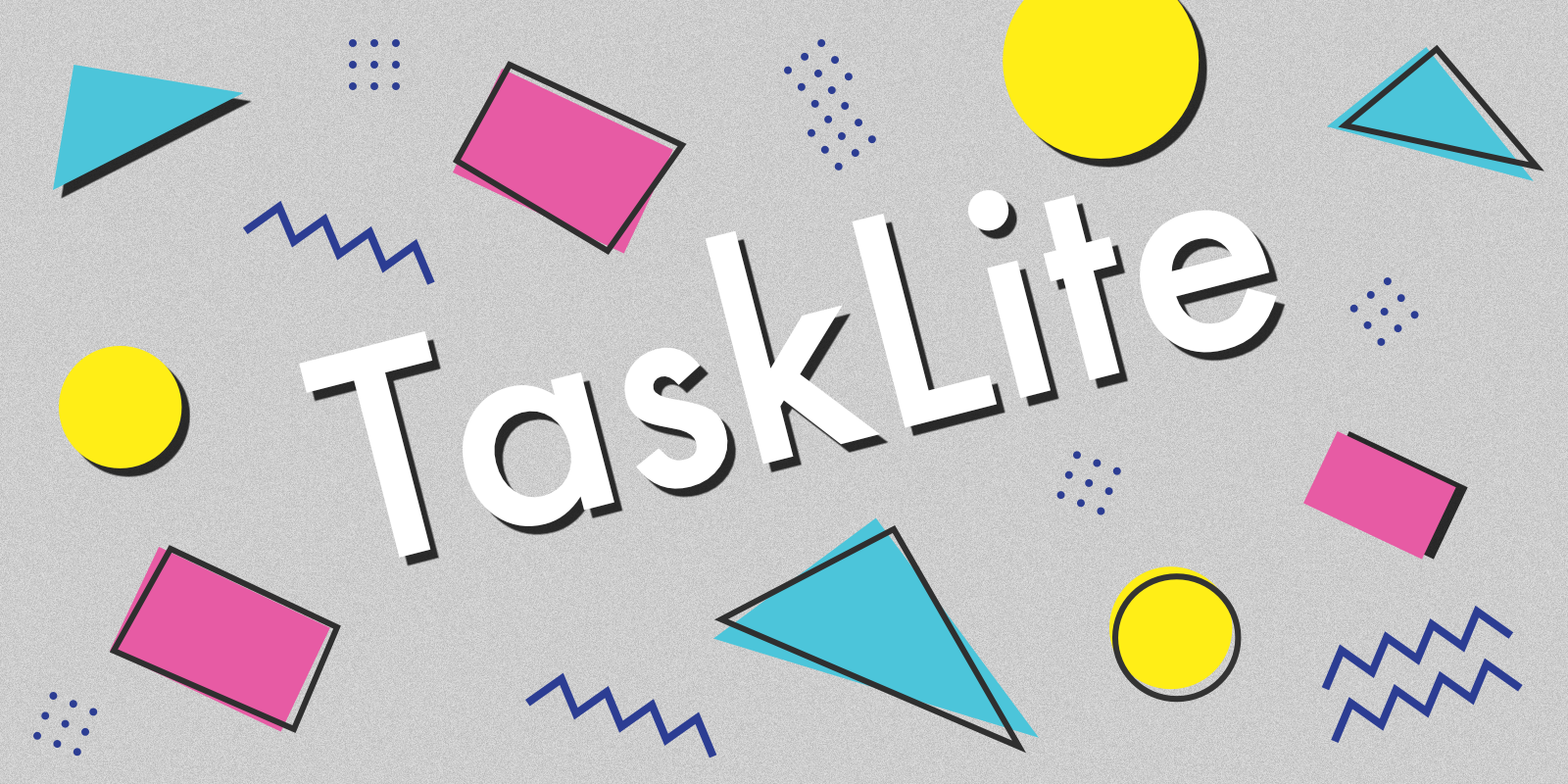 TaskLite is a CLI task manager built with Haskell and SQLite.

The Code is available on GitHub.

For help please come visit us on one of the following sites:

Check out the following pages for instructions on how to install the different versions of TaskLite.

When you update to a newer version of TaskLite, all your data will automatically migrated to the latest version. This also works if you skip a few releases.

Nevertheless, it's highly recommended to run tasklite backup before installing a new version.

Also be aware that rollbacks are currently not supported.

Install it via my Homebrew tap:

You can also get this (and previous) versions from the releases page.

Make sure to download the artifacts with curl or wget as macOS prevents the execution of files downloaded via a browser.

Furthermore you can get the latest CI builds on GitHub's Actions page. They are quite stable since only tested and production ready code gets merged into the master branch.

You can get the latest versions on GitHub's Releases page.

Furthermore you can get the latest CI builds on GitHub's Actions page. They are quite stable since only tested and production ready code gets merged into the master branch.

Another easy way to get started is using the prebuilt Docker image:

When exiting the container all data will be discarded.

For repeated local usage run following command, but make sure to replace $TASKLITE_PATH with the path to your TaskLite installation as defined in your config.yaml file. Per default it's created in the XDG base directory: $HOME/.local/share/tasklite.

To make it easier to use, create an alias like:

Providing your own config.yaml file to the docker container is not yet supported.

To build TaskLite from source, you need to install Stack first.

To test the installation run:

It's a good idea to customize your config file at ~/.config/tasklite/config.yaml afterwards.

Check out the example config file for infos about available settings.

Attention: This is still early alpha

A few dependencies must be available to build the app. To install them on macOS run:

It might be necessary to add the package "libffi" to the pkg-config search path before installation. For example with fish:

Alternatively you can use the DB Browser for SQLite to view and modify your tasks directly in the SQLite database.

The web app is currently based on Datasette and can only be used to view tasks, but not to create new ones.

In combination with the Docker container the web frontend for the SQLite database can be served in following way:

Attention: Make sure that the IP address matches with your host's.

Make sure to bookmark the views for easy access.

Another way to host a simple web frontend is SQLite Web. While it's more bare bones than Datasette, it has the advantage that it also allows you to modify data.

Why another CLI task manager?

Why not Org-mode style?

What are your long term goals?

Will this service also be available in the future?

What are your incentives to keep this service alive?

What happens if you die?

Can I export my data in a practical format?

Who has data sovereignty?

There is no time frame when the following enhancements will be implemented since the amount of time I can spare to work on TaskLite fluctuates heavily.

However, I'm using it daily and it has become something like my second brain. Since I'm not interested in abandoning my brain, rest assured that there will be steady progress on this in the future.

The enhancements are roughly listed with descending priority.

Since TaskLite started out as a replacement for Taskwarrior, one of my main goals is to reach feature parity with it. Some of the major features still missing:

Check out the page "Differences to Taskwarrior" for a detailed comparison.

Currently the core of TaskLite and the CLI are somewhat mixed up in the code. I'd like to split them up, so that TaskLite Core can be used as a library in other applications which need to manage internal tasks / queues.

Check out the page Haskell API for Programmatic Usage for more information.

I'd like to be able to run TaskLite on a cheap v-server in a dedicated server mode and have it host a simple REST API, and an Elm webapp consuming it.

This would then be a good way to casually browse and edit the tasks in a more graphical way.

There is no concrete plan for native synchronization support yet. I've been using Dropbox for synchronizing the TaskLite database among several computers, which has worked astonishingly well so far.

Another good solution could be Litestream, which continuously streams SQLite changes to S3-compatible storage.

While there is already a prototype included in the code, I currently don't plan to further work on it any time soon.

Instead of allowing one to explicitly set a state, TaskLite infers the current state from several other fields.

There are 2 primary states:

A task is either recurring or repeating, but can't be both at the same time. For more information and examples check out the corresponding documentation page

The priority of a task is a decimal number between negative and positive inifity. It is automatically calculated based on the age, the due date, and several other values.

The idea is that you never have to manually set a priority, because it can be derived accurately from other values. This of course requires you to use the other available meta information adequately!

The exact calculation algorithm can be found in the taskViewQuery function in DbSetup.hs.

A task can have several notes. Each note is identified by an ULID.

The difference between repetition and recurrence is the reference point from which future tasks are calculated from.

Recurring tasks are tasks which need to be done every day, week, etc. and must not be delayed. I.e. missed completions must be caught up immediately. Check out the "Pay the rent" example below for more details.

A task is either recurring or repeating, but can't be both at the same time. For both repetition and recurrence series, only the currently active task exists and subsequent tasks will be created on demand, once the current task is closed.

This is a best effort list on how to import your tasks from other task managers to TaskLite.

If you have all you tasks in one YAML file like this:

Run following command to import it. Be sure to make yaml2json available in your path and to install jq first.

There is currently no proper way to export tasks.

You can export all tasks / notes from Google Keep via Google Takeout. It provides a Takeout/Keep directory with one .html and .json file per task.

To import the .json files, change into the directory and run following command:

The title of the Google Keep note becomes the body of the task and the note itself becomes a TaskLite note attached to the task. A list of sub-tasks will be converted to a GitHub Flavored Markdown task list.

Telegram's "Saved Messages" -- a.k.a. messages to oneself -- are a pretty convenient inbox. Here is how to move them to TaskLite afterwards:

Hooks can either be specified via the config file or via hook files. But make sure that all hook files are executable, otherwise they won't be picked up by TaskLite.

The hooks receive data from TaskLite via stdin. Possible fields are:

After execution, every called hook must print a JSON object to stdout (even if it's empty). All fields of the JSON are optional.

Hooks can write to stderr at any time, but it is not recommended. Rather write a {message: ''} object to stdout and let TaskLite print the message with improved formatting and coloring.

To see the JSON for a single task run:

While the CLI interface is the main interface of TaskLite, it also supports several others (with varying amount of features).

Check out the following pages for more details.

To add a task run:

It is also possible to immediately add tags when creating a task:

And even to set certain fields:

Attention: The tags and special commands must be the last parameters, but their order doesn't matter.

For a full overview of all supported subcommands run:

There is no first class support for views (or "context" in GTD slang), because it can be easily implemented with aliases / custom CLI commands and the SQL query API.

For example I have following work command in my $PATH:

In order to further analyze and filter tasks TaskLite includes the ndjson command, which prints all tasks as newline delimited JSON objects.

This output can then easily be analyzed and filtered with standard UNIX tools. E.g. following example prints all tasks related to music:

For example to import a GitHub issue simply run:

Or to import a task from TaskWarrior:

In order to avoid data loss of fields which aren't directly supported by TaskLite, the whole imported JSON object is also stored in TaskLite's task metadata field. However, if the original JSON object already has a metadata field, its value is used instead.

Warning: TaskLite does not properly support importing tasks which were created before 1970. While they can be imported, the creation date is set to 1970-01-01.

Use one of following commands:

The export commands in combination with other common CLI tools like csvkit can also be used for custom views of tasks.

The metadata field allows you to store additional data for each task which is not yet covered by TaskLite's core fields. It is stored as a JSON object and therefore supports all JSON datatypes.

This is similar to Taskwarrior's User Defined Attributes.

Metadata is especially useful for importing and migrating external tasks without losing any information.

If you, for example, want to import following task.json file, you will notice that it contains a field kanban-state, which has no equivalent in TaskLite:

However, you can still simply import it, as the additional field will be stored in the metadata object:

To access the the metadata key programmatically you can do following:

This can also be used to update metadata fields:

Soon TaskLite will also support a dedicated metadata command like:

The desktop app is still very early alpha and can currently only list the tasks. It's implemented with a declarative Haskell wrapper for GTK.

The web app is currently provided by Datasette.

The REST API is currently provided by Datasette.

All web views can be configured to deliver JSON by simply changing the file extension in the URL to .json.

While TaskLite is primarily a tool to manage your personal tasks, it can also be used as a dependency of other programms.

For example as a queue for processing tasks or a backend for a bookmarking service.

The real power of TaskLite gets unlocked when it's set up to be tightly integrated with other apps. This section contains several examples of how it can work together with other systems and services.

Folder actions are a feature on macOS to execute some code when files are added to a specific directory.

This can for example be used to import all Email files (.eml) which are saved in a directory.

Check out the makefile for all development tasks

Use asciinema to generate the terminal recording:

Change the size of the terminal in the recording.json file to:

Then use svg-term to generate the SVG image:

Afterwards change the health check URL to /healthcheck for the load balancer at https://console.cloud.google.com/compute/healthChecks.

This document lists all changes to the functionality of TaskLite.

If TaskLite isn't your cup of tea, maybe one of the other free task managers fits the bill:

For completeness sake here is also a list of popular commercial apps and SaaS providers: